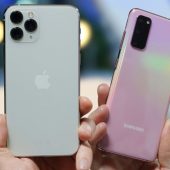 I’ve been successful at avoiding all things Black Friday/Cyber Monday this year, save for a small splurge on a cold-brew coffee maker. If you’re looking to upgrade your life in a bigger way—in the form of a new phone—you should know that you can get Samsung’s flagship Galaxy S20 Androids (the S20 and S20+) at their lowest prices ever right now. And not to be outdone, Apple fans can also score some pretty great savings on refurbished iPhones.

We’ll start with Samsung. Head on over to Amazon, where you’ll find the Galaxy S20 for a mere $750. The larger Galaxy S20+ can be had for $900. A quick look at Amazon price-tracking site camelcamelcamel verifies that these are, indeed, the lowest prices Amazon has ever offered on the Galaxy S20 and Galaxy S20+. Those prices are for the base models of both phones (128GB), and can pick from the Cloud Blue and Cosmic Gray colors for the S20; or the Cloud Blue, Cosmic Gray, or Cosmic Black colors for the S20+.

We’ve covered both phones’ specs some time ago. I’d say that either is a solid choice if you want a top-shelf product (if prone to a bit of software bloat) that’s still reasonably sized—and provided you don’t need a stylus for anything. Both phones also support 5G, for whatever that’s worth in your area.

As for those iPhones, head on over to Woot to view the full listings. You’ll find refurbished iPhones ranging from the iPhone 7 to the iPhone XR and XS. In other words, iPhones that are anywhere from 2-4 years old, with potential cosmetic damage—a fact that shouldn’t really matter at all once you slap it in a protective case. If you can, shoot for the iPhone XS or iPhone XR, as they’ll be a bit more future-proofed than the ancient iPhone 7 (even though $150 for an iPhone isn’t bad at all).

And, yes, Woot’s offers beat Apple’s own refurbished listings. For example, you can buy a refurbished iPhone XS directly from Apple for $640. That same configuration, during Woot’s one-day sale, is only $430. Not bad, but there’s a caveat; it appears the Woot phones offer no guarantees about the condition of the battery, beyond that they will have at least an 85% charge. As one who has dealt with an iPhone X’s decaying battery—and the resultant performance issues—i wouldn’t be thrilled to get anything but a brand-new battery in my newly purchased iPhone.

That’s partly why Apple’s refurbished iPhones cost more—they come with a one-year warranty (same as any new iPhone) and a brand-new battery. On Woot, you’re getting a 90-day limited warranty and a battery that has been tested, but could be in less that peak condition. On the plus side, you can always give the iPhone a try and, if you hate it, return it within 30 days.