The Best Kirby Merchandise in 2021 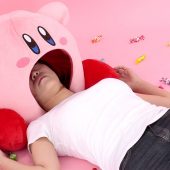 Kirby Fighters 2 came out recently (see: 3+ months ago), and while it’s not my thing at all, it did remind me that there hasn’t been a memorable, mainline Kirby game since 2016’s Planet Robobot for the Nintendo 3DS. And that got me thinking about how much Kirby shit I bought in 2020 despite not enjoying a single entry in the series in almost 5 years. Hell, I even wrote an article for this very site about how getting a Kirby Banpresto box in the mail felt like ingesting serotonin. The obsession didn’t stop there either. For months, I mulled over whether I should buy the Kirby Art & Style Collection while it was on sale (it still is, for the record).

But, you see, Kirby isn’t really about the gameplay, or even the games. It’s about an adorable alien puffball from a place called Planet Popstar who’s just doing his best sucking up monsters and using copy abilities to fend off the empirical King Dedede. He’s more than you think, he’s got maximum pink. Kirby? Kirby. Kirby’s the one, and he’s got more merchandise to his name than a ‘90s grunge band. In fact, he even has his own café in Japan, with two locations having re-opened in 2019, in Tokyo and Hakata.

Here I’ve assembled some of the best, worst, and downright strangest Kirby merch you’ll find on the internet. Know of some Kirby stuff that doesn’t suck? Sound off in the comments below!

If you’re bummed that it’s 2021 and nothing has fundamentally changed for the better, you can temporarily relieve that feeling for just $22. Believe me, I’m a wreck! But leafing through 271 pages of Kirby art before bed with my wife made life worth living until we hit the last page.

He hungry for cat head.

This one annoys your neighbors. Squeeze the cheeks and it’ll make the Kirby’s signature suction sound. Just slide your fingers across the stem and you can start making your own music with this advanced Japanese-imported toy instrument. Here’s a video of it in action, courtesy of mklachu on YouTube.

It’s a shame these are sold out on Amazon because, yes, I would drink out of an adult sippy cup if it had Kirby absorbing a mountain of sweets (and one Maxim tomato) or our favorite lil’ glutton dozing off on a full stomach with a Waddle Dee by his side. Sign me tf up. On the bright side, you can grab the trio of Kirby’s Dream Land 3-themed stacking cups on eBay for around $20.

Now that’s an absolute CHONKER. Measuring 13 inches high and 17 inches wide, according to the seller, Juantin’s “big size” pillow plush will undoubtedly soak up your inevitable 2021 tears. You can also punch it when you get mad and it won’t feel a thing. At least that’s what I’m guessing based on that last image on the Amazon listing page.

My wife has this set from when she was living in Japan, and it’s actually a pretty fun game to pass the time. Altogether you have 10 pieces with the goal of ultimately stacking them in different arrangements as instructed by a manual in the box. The more you’re able to complete, the harder it gets to keep the Kirbys from collapsing. It’s like a real-life Kirby Mass Attack.

Toys-to-life as a concept seems to have fallen off the face of the Earth, but I still have over 60 amiibo including the four above AND the apparently valuable Super Smash Bros. variant. You can get Kirby, Dedede, Waddle Dee, and Meta Knight all for under $30 each, though expect to pay exponentially more for the 2014 design made for Super Smash Bros. for Wii U. Both are compatible with Super Smash Bros. Ultimate, if you plan to even take them out of the box.

You can’t put a price on art. If your walls are feeling empty and you need a little something to keep you motivated throughout your days spent at home, why not hang this grotesque pixel print on your wall? A spitting image of our rosy hero, this is the perfect accouterment for any home in need of lavish decor. Don’t think this horrific rendering of our fun-sized friend is your only option, however, as there’s plenty else like it over on Society6.

Kirby is more than a video game franchise at this point, he’s a cultural icon. Like Baby Yoda (excuse me, Grogu), Kirby feels as though he was focus-grouped into existence by market researchers in an effort to introduce the world’s cutest character, cashing in on its widespread success with—you guessed it—merch. In reality, Kirby was designed by one man at the age of 19, Masahiro Sakurai, director of some of my favorite games of all time, including Kirby: Nightmare in Dreamland, Kirby Air Ride (we’ll touch on that later), Kid Icarus: Uprising, and the long-running Super Smash Bros. series.

“Just after I joined Nintendo, they were accepting game design plans for ‘a game that anyone could enjoy’,” he said in an interview published in the Japanese edition of the Kirby’s Adventure strategy guide circa 1993. “That got me thinking, ‘I want to make a cute main character who everyone will love!’ The game I ended up making then was the Kirby’s Dream Land for the Game Boy.”

Of all the criticisms I’ve seen of Kirby titles, particularly the more recent ones Sakurai is no longer involved with, the most common I’ve seen is that they’re too easy. I’d argue that’s the point. Outside of the hardcore crowd, most people I know who dabble in games once or twice a year tend to love Kirby. His games are an accessible entry point into gaming. They don’t require seasoned knowledge of how to aim a camera with the right thumbstick while using the left to control your character, and the mechanics are simple enough that you can learn how to play on the fly, just press A to jump and B to inhale.

Some of the games are also remarkable enough in their creativity that it’s easy to forget how little there is in the way of gratifying challenge. Kirby’s Epic Yarn on the Wii (now also on 3DS), for instance, was the perfect Co-op game to play with your non-gamer family members. In it, Kirby transforms into yarn and has to traverse an entire world made of fabric, pulling zippers, slithering through narrow knit tunnels, and even acting as a pendulum to swing between brass buttons. Just 6 hours long, I beat it in an afternoon with my younger sister back when it first released, and I’ve remembered it fondly ever since. Kirby’s Epic Yarn has also influenced a spate of other Nintendo games with non-traditional art styles such as Yoshi’s Woolly World, Yoshi’s Crafted World, and the claymation collectathon Kirby and the Rainbow Curse, which I desperately hope makes its way to Switch someday, if only for the novelty.

The title of “my personal favorite Kirby game,” however, has to go to Kirby Air Ride, an old GameCube kart racing-esque game in which I barely touched the campaign. That’s right, back in 2003, my friends and I would gather on the couch and play an esoteric mode-within-a-mode called City Trial > Free Run for hours on end, pretending one of us was operating a car dealership and the other was residing inside a volcano. Certain vehicles were highly coveted, especially the Flight Warp Star, which was capable of soaring high above the city. More than once, we did this for over 10 hours straight. It was awesome. While Air Ride isn’t a particularly good game, it does speak to the uniqueness of the series. Whether credit is due to the developer or yourself, there’s always something about a Kirby game that’s bound to resonate.

Like the merch they inspire, Kirby games will always hold a special place in my heart for their universally fun, charming, and ridiculous ideas. Give one a shot sometime. I recommend starting with Kirby’s Epic Yarn (again, also on 3DS), or Kirby: Planet Robobot since, in my opinion, the latest Kirby: Star Allies for Nintendo Switch uses cooperative play as a crutch rather than a bonus feature to a game that can otherwise stand on its own. That said, our friends at Kotaku say it’s gotten better since I last dipped my toe in 2018.