The Best Superhero Movies to Revisit in 2021 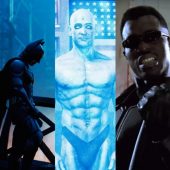 Whether you love superhero movies or hate them, it’s become the norm over the last decade to get a new one every couple of months. That trend was upended in 2020. If you’re feeling a bit of withdrawal, here are some older classics you can revisit.

After Birds of Prey—the only pre-pandemic comic book movie of 2020—we got very few new options. There was the surprisingly poignant yet overall middling The New Mutants, and the recent Wonder Woman 1984, which launched simultaneously in theaters and on HBO Max. If you really squint your eyes, you could reasonably call Sonic the Hedgehog the highest-grossing superhero movie of 2020.

That’s slim pickings for a year that followed 2019, which brought us not only the biggest superhero movie, but the biggest movie of all time. So to make up for what we missed out on this year, we’re looking backward instead. The last 40+ years of superhero movies have delivered a lot of duds, but plenty of classics stand the test of time. Below are 10 of those films that are the best in their field, milestones for the genre, or even just weird enough to merit a rewatch.

The first Iron Man set the Marvel Cinematic Universe into motion, but it’s strange to rewatch now. The series opener was a more grounded story, centering around political conflict on Earth, rather than the grand space battle the MCU ended up at in recent years. Seeing the early days of Tony Stark—as well as reminiscing about the simpler time when superhero movies were about basic good-guy-bad-guy conflicts—could be a nice reprieve right now.

Before Spider-Man and X-Men movies kicked off a new wave of superhero movies in the 21st century, the original Superman in 1978 paved the way. The first superhero movie with a major studio budget, it remains a simple but powerful aspirational story. It also features the dorkiest scene in any superhero movie: Superman flying really, really fast around the Earth to reverse time. And you thought a talking raccoon was ridiculous.

Kick-Ass is the polar opposite of classic Superman films. It’s cynical, violent, and no one has any superpowers. Instead, the film lampoons the superhero genre, exaggerating the violence that would really occur if superheroes were real. Long before The Boys came along, Kick-Ass was doing the gritty comedic comic book movie schtick.

Blade is too-often overlooked as a milestone in superhero movie history. It was a bloody, R-rated Marvel movie about vampires at a time when none of those things were cool. But you know what is cool? Blade. As played by Wesley Snipes. The movie was a hit, giving Marvel (then just a comics company) the fuel it needed to start funding hits like Spider-Man and X-Men. If you’ve enjoyed any Marvel (or really any comic book) movie over the last two decades, you have Blade to thank for it.

The title of “first superhero movie to earn a billion dollars at the box office” could hardly go to a more worthy contender. Christopher Nolan’s The Dark Knight, featuring Heath Ledger’s Joker, was a masterclass in taking comic book movies seriously. While dark and gritty was a bit overplayed even in 2008 when this movie came out, it’s balanced enough to still hold up today.

The X-Men movies run the gamut from pretty great to kind of awful, but if you want to hit one of the series’ peaks, X-Men: First Class is where it’s at. Set in the 1960s—and, incidentally, kicking off a trend of superhero movie period pieces—it follows the origin of the main cast from earlier X-Men movies, and inserting Professor X and Magneto into the Cuban Missile Crisis. It may have broken the X-Men timeline (further), but it’s one of the better X-Movies.

Before Zack Snyder started working on the same movie for 7 years, he directed the lengthy Watchmen movie. The comic of the same name was considered unadaptable, and while the film still has its flaws, it brought the story to life in a visually stunning way few comic book movies have ever even attempted.

Did the headline on this article promise good movies? No. But it’s hard to argue that Howard the Duck isn’t important enough to warrant a revisit. The first full-length feature movie based on a Marvel Comics property—yes, really—Howard the Duck is a bizarre, ridiculous movie that has to be experienced at least once in life. It might not be cinema, but at this point it’s better than rewatching The Office for the hundredth time.

Hold on, The Matrix is a superhero movie? Well, kind of. It might not come from the usual background of comics (usually from Marvel or DC), but it broke new ground on the physics-defying acrobatics that have come to characterize modern superhero films. There was a time when comic book movies were seen as too silly or too impossible to film effectively. The Matrix changed that.

Also, you can’t fly or stop bullets and not call yourself a superhero. Sorry, I don’t make the rules.