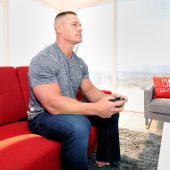 These are the best Nintendo Switch deals for January 2021.

Between the cold weather and the never-ending pandemic, it’s prime time to find a comfy spot inside and lose yourself in a great game. Luckily, you can find some killer deals on Switch games right now, with all-time gems like The Legend of Zelda: Breath of the Wild and Super Mario Odyssey on sale alongside more recent faves. You’ll also find some great accessories on sale in our list of today’s top Nintendo deals below.

Just released last month Ubisoft’s Immortals Fenyx Rising is an open-world adventure inspired by Greek mythology as much as it is Nintendo’s Legend of Zelda: Breath of the Wild. It hails from the developers of Assassin’s Creed Odyssey, but is tighter in focus, cartoonish in style, and pretty funny to boot. It’s already half off at Amazon.

Nintendo’s biggest new Switch game is $10 off at Amazon right now. Hyrule Warriors: Age of Calamity revisits the world and characters of the brilliant The Legend of Zelda: Breath of the Wild, but with frenetic hack-and-slash gameplay that’ll see you dispatch literally thousands of foes along the way.

Looking for one game that could potentially last you throughout the rest of the pandemic quarantine… however long that might last? Look no further than Sid Meier’s Civilization VI, the latest entry in the life-consuming strategy franchise, in which you build up a civilization that can last through the ages. It’s down massively from the original launch price of $60.

If you missed it when it first released in 2019, Astral Chain is well worth looping back on now. This distinctive, anime-stylized, hack-and-slash action game takes place in a dystopian future in which you’re fighting off alien invaders as a special police task force. PlatinumGames is well known for its intense combat and unique systems, paired with enviable style, and that’ll all true here as well. Save $10 off at Amazon or Best Buy.

By nature of the console’s middling popularity, Captain Toad: Treasure Tracker seemed widely overlooked when it first debuted on Wii U. But now on Switch, it’s another low-key Nintendo gem to put on your wish list. This charming platform-puzzler is on sale right now for $7 off. Not only do you get the full original game, but also new courses inspired by the brilliant Super Mario Odyssey.

Want an epic role-playing game to sink your teeth into? Xenoblade Chronicles: Definitive Edition refreshes the stellar original Wii odyssey with crisper graphics and a brand new epilogue, delivering the sci-fi quest for a new generation of players. It’s $11 off the list price right now from Amazon.

Widely regarded as the Switch’s crowning masterpiece and one of the greatest games of this generation, The Legend of Zelda: Breath of the Wild launched alongside the system nearly four years ago. It’s $20 off right now—one of the biggest discounts we’ve ever seen.

You never know when you might need an extra Switch controller or two handy, whether it’s for young kids or for friends and family. Assuming you don’t want to spend large for extra Joy-Cons or Pro Controllers, PowerA has this officially licensed wired Mario controller for $10 off right now.

While the Switch is hardly ground zero for fighting game action, it has some serious gems on it, including Mortal Kombat 11 and Dragon Ball FighterZ. If the Switch is your console of choice and you still want to get the arcade-style experience, grab this PowerA Fusion Wireless Arcade Stick while it’s half-off at $65. It has a full-sized joystick and buttons and can be used wirelessly via Bluetooth or wired via USB-C.

We don’t have any of the core Kingdom Hearts games on Switch, but at least you can savor the music from the beloved Disney/Final Fantasy mash-up role-playing series with the newly-released Kingdom Hearts: Melody of Memory. This rhythm game revisits the world and characters of the series in bite-sized chunks, which makes it ideal for Switch play. It’s $15 off at Amazon right now.

Give you Switch or Switch Lite console a safe slumber inside the dome of the sleepiest Pokémon thanks to this officially-licensed PowerA carrying case, now $8 off. Snorlax’s head opens up to reveal space for either handheld, a bevy of game cartridges, and accessories, and then it all zips back up with a handle for easy transport.

Ubisoft’s juggernaut annualized dancing series just won’t stop, which means that Just Dance 2021 is here right on schedule. And right now, you can save $20 off the list price of the latest entry, which has hit songs like Lizzo’s “Juice” and The Weeknd’s “Blinding Lights” in the mix. Get movin’ on this deal and then get movin’ in your home.

One of the Switch’s best early puzzlers just got a brand new sequel, and Amazon is already taking $10 off the list price. Puyo Puyo Tetris 2 is a mash-up of the two titular puzzle series, with a clever hybrid model that works well across multiplayer, an RPG-like mode, and more.

If you’re downloading games from the Switch eShop, then you’ll probably need some extra space. Luckily, the Switch accommodates affordable microSD cards, and there are even Nintendo-branded versions from SanDisk.

This official microSD card has a Mario mushroom on it and is currently on sale for $25, marked down $10. However, if you can deal without the branding, you can grab a standard 128GB SanDisk microSD card for $14… and it works just as well.